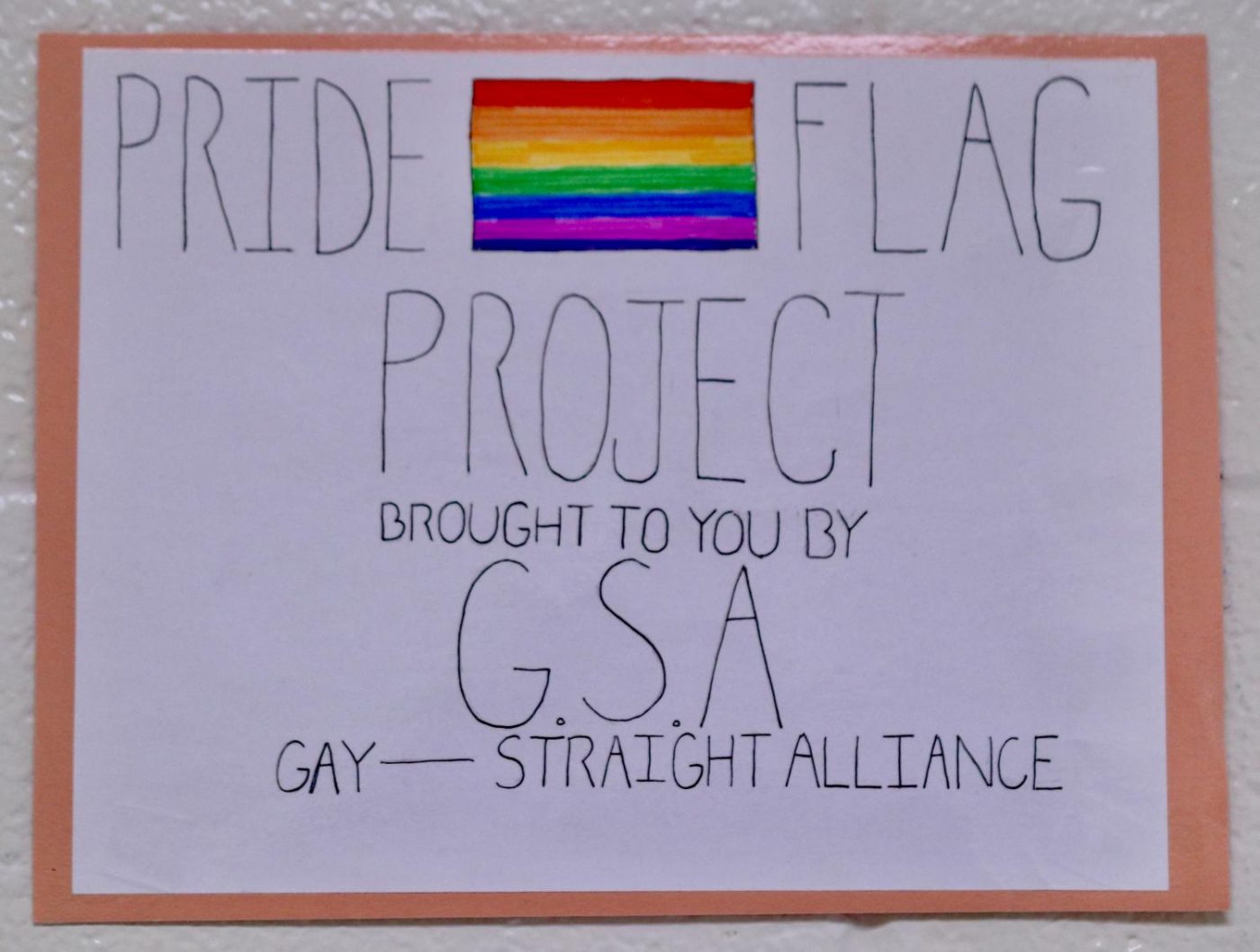 Insight on GSA's newly installed flag exhibit and the controversy and social implications surrounding it.

According to ACLU (American Civil Liberties Union), there are over 4,000 GSA clubs nationwide. “Gay-Straight Alliances, or GSAs, are student-led and student-organized school clubs that aim to create a safe, welcoming, and accepting school environment for all youth, regardless of sexual orientation or gender identity. GSAs help make schools safer for all students by providing support, educating others in their school about LGBT issues, and engaging in awareness activities. GSAs also allow LGBT and straight students to work together to take on issues that affect all students, including harassment and discrimination based on sexual orientation, gender identity, and gender expression.” (ACLU)

Click here to find out how to start a GSA Club in your school!

Woodford County High School implemented its GSA Club five years ago, during the 2015-2016 school year, and has continued to follow a mission statement centered around representation and inclusion of LGBTQ+ persons, as well as all allies of the community. The club was originally sponsored by Ms. Schwarz, an English teacher at WCHS, but as of this year, a new Social Studies teacher, Velonis, is co-sponsoring the club alongside Schwarz.

This year, during the 2019-2020 school year, the GSA’s primary project was installing an educational sexual orientation and gender identity flag exhibit located in the back English hallway of the school building where nothing previously was. “It was really inspired by, at the beginning of the year, there was…an uptick that people were noticing [of] a lot of bullying and kind of slurs being thrown around related to sexual identity. And so we thought – we’ve got to educate. That’s the best course of action here,” said Schwarz.

However, after the exhibit’s installation in late November, controversy arose surrounding some’s interpretation of the exhibit. With her room being physically closer, Schwarz was at the forefront of the majority of action taken towards the exhibit. “It [the exhibit] has been up for about five weeks now and, essentially every day, the pride flag, in particular, has been attempted to be pulled down. Day one, the pride flag was pulled down and thrown outside. And then for the two/three weeks following the flags have been pulled on, ripped, torn, spit on, and food has been thrown on them as well,” said Schwarz.

The flags have been pulled on, ripped, torn, spit on, and food has been thrown on them as well.”

According to Schwarz, she, the GSA Club members, and “some kind students” have continued to hang the flags back up, as well as clean them off “essentially every day.” “It seems to have died down a bit, but I did have to replace the pride flag a couple of days ago because it was ripped beyond just a couple of stitches,” said Schwarz. Schwarz and Velonis both agreed that the Pride flag was being especially targeted because “it is the most recognizable.” “Sometimes the other flags don’t get recognized as easily.

I have a transgender pride flag in my room and it took about a month for students to figure out what that represented. Whereas, if I had a rainbow pride flag it probably would’ve been instantly recognizable…and it’s encompassing of the entire LGBT community as well,” said Velonis.

Long-term GSA Club members Amanda Cason (12) and Olivia Olivas (12) said that they were “not surprised” when the exhibit was initially vandalized. “I was angry, disappointed, but not surprised. I was expecting it to happen but it still angered me and made me upset. I just don’t understand why people put so much effort into hating someone else,” said Cason. Olivas said, “I wasn’t all that shocked when it happened because I’ve been hearing everyone who wants to tear it down and burn the flags. I just think it was stupid to tear it down because it did nothing to them [the vandals]. [They] only view the Pride Flag as the flag for everyone, so if they rip down one, it represents them ripping down all,” said Olivas.

If they rip down one, it represents them ripping down all.”

The GSA’s exhibit includes all of the following flags: Gay Pride Flag,  Lesbian Flag, Bisexual Flag, Transgender Flag, Nonbinary Flag, Pansexual Flag, Intersex Flag, Asexual Flag, and the Straight Ally Flag. The exhibit also includes informational posters explaining each of the sexualities and genders, including “How to be an Ally” on the Straight Ally poster. (If you have any questions about terminology used in this article, please visit Glossary of Key LGBTQ+ Terms.)

There are numerous social factors that often play a role in cases like these such as family and parental influence, religion, cultural beliefs/viewpoints, (social) media, geography, peer pressure, gender roles/societal norms, extremism, lack of education/ignorance, bully culture, fear of the “other”, among other types of influence. In this article, I will be diving into how each of these social factors plays a role in the LGBTQ+ community, as well as how they play a role in what’s happening in Woodford County and at WCHS this year; stay tuned for said chapters!

If you want a picture to show with your comment, go get a gravatar.