WWE games are usually annual, but 2K22 breaks that mold, with 2K taking an extra year to develop the game. The switch to a much-needed two year schedule helped a lot. Read more below. 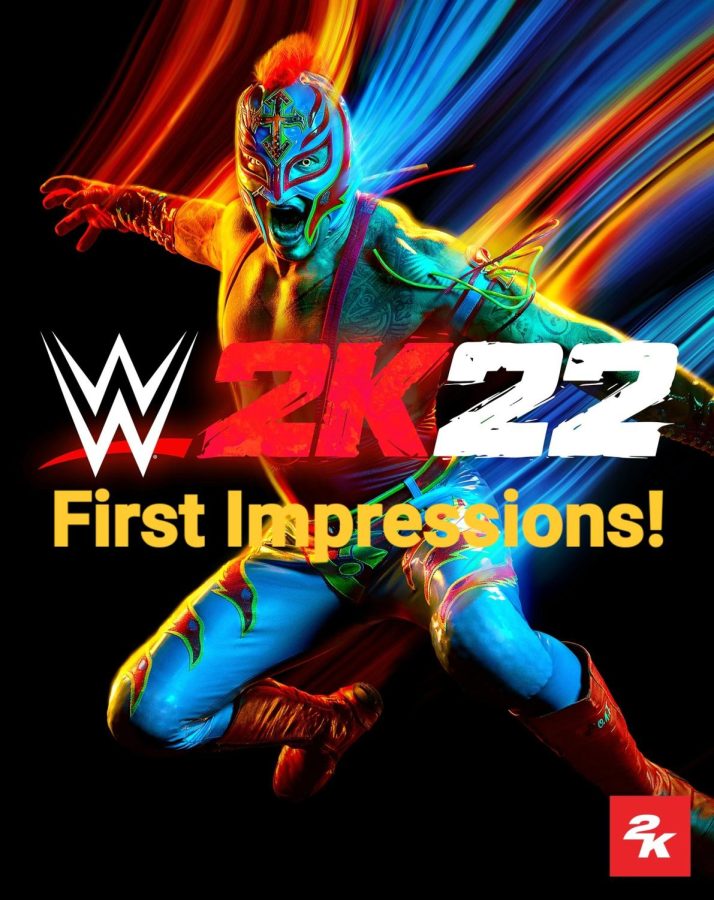 After the PR disaster that was WWE 2K20, developer Visual Concepts and publisher 2K Games had an uphill battle in gaining back fans’ already waning trust. I’ll try not to bash 2K20 too much in this review, but the past has to be touched on in order to move to the present. The fans’ mistrust was definitely warranted. Examples of why are the unending glitches affecting every part of the game, and personally, the control scheme being unintuitive. Because of these complaints, they ended up taking a year off of the annual cycle so they could further develop the next game from the ground up. Has WWE 2K22 fixed these issues, and improved on their game? In short, yes. They’ve done it in spades. Read on to find out how.

The Tutorial
The first thing I’ll cover is the tutorial, surprisingly, as it’s the first task people do when booting up the game.

WWE Superstar Drew Gulak is on hand to guide you through the new control scheme, that includes a combo system similar to what you’d find in fighting games like Tekken, Mortal Kombat, and Street Fighter, creating a smoother flow of gameplay. That alone earns my respect, but they went one step further, and let Gulak be himself while teaching me, leading to lots of PowerPoint presentations and one of the funniest times I’ve had going through a tutorial.

In my opinion, I think the tutorial is great no matter the skill level because you can find practice and a bit of humor.
The Gameplay
To reiterate my earlier point about the new controls, they are amazing, mainly due to the new combo system.

The pin escape minigame has been changed to a button mash frenzy, making it even more fast-paced. There’s also a new stun mechanic, where if you deal enough damage to your opponent they’ll get stunned, opening them up to be attacked with no way of defense.

From WWE 2K15, all the way up to 2K20, 2K was focused on simulation-style gameplay. They changed that out this year for a more arcadey feel, similar to what I remember having in the THQ games, like the SmackDown series for the PS2, or WWE All-Stars for the PS3, and its done them a lot of good, as you can probably see from my video attached below.

The Presentation
Lifelike? Is it even possible to say that about a game without sounding cliché?

But all you need to do is go into a match and you’ll see what I’m talking about. Look at the camera angles when the wrestlers make their entrances, the pyro for Razor Ramon, and even the details in Bret Hart’s jacket. If I didn’t know that match was in WWE 2K22, to begin with, there’s a possibility I would think that was a real wrestling match, as opposed to a game.

Once the match starts, that same level of presentation is still there. The camera angles that happen to emphasize the big moves are a welcomed change, and the camera takes a more background approach when the wrestlers exit the ring.

And when the match ended, the victory animation for Bret was true to him, and what he would do when he won a title. Simply stunning.
The Bad
Before we go any further, I’m going to get my grievances out of the way. These aren’t game-breaking by any means, but they still should be addressed.

First, the roster is painfully outdated, with some roster members not being seen on WWE TV since early 2020! For example, Swerve Strickland (formerly known as Isaiah “Swerve” Scott), Buddy Matthews (formerly known as Buddy Murphy), Kyle O’Reilly, William Regal, and Keith Lee are still in the game, (there are a lot more people that I haven’t mentioned), and there’s a possibility that they appear in both a WWE and AEW video game this year. I understand the focus was on the gameplay and presentation, but a huge part of the presentation is making sure it’s as close to the current product.
What I’m trying to say is even though they ironed out the gameplay structure and made it truer to life, they took a step back by leaving some people in, even though I’m not very mad at it, because I’m happy I get to still play as them.
Next gripe, when you’re playing a tag team match, the AI is frustratingly inconsistent when it comes to preventing the opponents from breaking up pins or submissions, where they’re never broken up, or they’re broken up too much. This holds over, for the most part, in other multi-person matches, especially the Elimination Chamber. Because of these faults, the matches usually take 30 minutes to an hour to play.

It includes leaderboards for the best players to compete with each other, but that’s not my gig.

I’ve played a lot of normal matches, Elimination Chamber matches, and Extreme Rules matches online, both public and private, and I’ve had a lot of fun.

Next in the online modes are the  Community Creations dashboards, where people from all over the world submit their best creations for people to use in-game. I’ve downloaded many wrestlers that I’m fans of, and they all seem like they could pass as actual 2K22 roster members, not just creations by the community.
The Showcase Mode
Where the roster’s outdated nature is felt the worst is in Showcase Mode, where it celebrates the legendary career of Rey Mysterio.

The mode starts out with the WCW classic, Rey Mysterio Jr. vs Eddie Guerrero at WCW Halloween Havoc 1997. During important moments of the match, the action will transition from in-game footage to real-life footage of the actual match. This makes it both look amazing and put the historical context of the match into perspective.

Rey provides some good comments during these “cutscenes”, but it’s all in kayfabe, meaning that Rey said things in the context of the story, and presented them as real, not just acting. Because of this, there’s was little new information for me personally throughout the Showcase mode, but it would be perfect for new fans.

Showcase mode is still fun, but there’s no debating that the roster is holding it back.
The MyGM Mode
Instead of running for an indefinite amount of time like in the old SmackDown vs Raw games, however, MyGM is condensed to 15, 25, and 50-week sessions.

This seems to be the case because the mode is pretty barebones. There are no midcard titles for wrestlers to fight for in this mode, like the Intercontinental Title or US Title, and you can’t fight for tag team belts either.

The inclusion of a popularity stat seems like a good idea in theory, but in practice, it leaves you repeating the same matches over and over. In many ways, it’s a reflection of the actual WWE product, where only a handful of superstars are able to “move the needle”.

It’s a good foundation for future installments, but right now it’s not even close to being the standard. Currently, that standard is still held by SmackDown vs Raw 2006 for older fans or Fire Pro Wrestling for newer fans.

You couldn’t choose the path you went down, it was chosen for you by the developers. Due to the years of mixed to bad reviews, 2K decided to build a new MyRise mode in place of it.

This would be a non-linear story where you could choose your own path. There are separate male and female stories that branch off whether you are a face (a good guy) or a heel (bad guy).

When you win titles,  there are specific stories for them.

For example, in the female MyRise mode there’s a storyline where Bayley, a wrestler on the Raw brand makes her own version of the Intercontinental title.  (She says she won it in a tournament in Rio de Janeiro, but she lies, I tell you). You can choose to challenge her for it or not. When I challenged Bayley to a match for the title and won, she said the title win was invalid because the title wasn’t won in another continent. I challenged her again in the UK and it was considered valid. That’s just a taste of this wonderful mode.

Overall, I rate this game a solid 4 stars out of 5. A very good step in the right direction, but the outdated nature of the game drags it down, especially in the Showcase mode. I just wish we could’ve had a Jericho, Big Show, or Angle rivalry match. Also, the AI is a pain, but everything else, from my perspective, is great. From the new controls to the revamped presentation, to the better online modes, to an actually decent story mode, to GM mode finally making a comeback, even though it was sub-par. Hopefully, WWE calms down with the roster downsizing, and the next game in the series won’t feel so outdated. This is again, a great foundation for the future, and I’m excited to see what it holds.